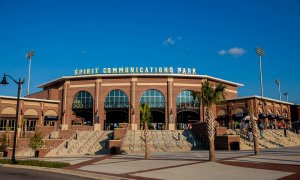 With a unique setting and a stunning design, Spirit Communications Park, new home of the Columbia Fireflies, had a strong debut last night. But the most important takeaway will be seen over time, as the ballpark is a catalyst for development in South Carolina’s capital city.

Last night saw the return of professional baseball to Columbia, as Low A South Atlantic League Fireflies opened their new ballpark before an over-capacity crowd of 9,077. There were the usual opening-day dramatics — fans were slowed when figuring out parking strategies, staff dealt with real crowds at the concession stands with the requisite long lines. But the lines are a fixable problem, and as the fans settled in, it was clear the ballpark was viewed as a success.

To learn more about the stadium and Spirit Communications, click here: