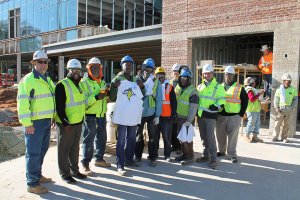 “We blew it out of the water,” Benjamin said.

When building the ballpark with a $29 million contribution of public funds was debated, Benjamin was a strong advocate. He was not the only one, however, who wanted to make sure that the project, which has a total tab of $37 million, employed a sizable share of local companies. “It was important to the entire council,” Benjamin said.

The results, he says, show how seriously the city took that mandate:

The city saw $14.8 million of the money spent on the stadium allocated to local subcontractors for the work, far exceeding the goal of $5.6 million. That is more than 2.5 times the goal for local subcontracting set by city council.

The four top local subcontractors all received work contracts for more than $1 million. They are LAD Corp. of Swansea for site work; D&T Steel of Pelion for steel; Rabon of Lugoff for masonry; WB Guimarin of Columbia for plumbing/HVAC; and Etheridge of Columbia for electrical work.

The project awarded $7.9 million to businesses that are classified as disadvantaged, meaning that they are majority-owned by people from racial and ethnic groups that historically have been at an economic disadvantage. That also far exceeds the project goal of $4.8 million.

The goal, Benjamin said, was to ensure that the money spent on the stadium circulated as widely as possible in the local economy. Employing a substantial number of local companies, Benjamin said, is the best way to see those dollars help other local businesses as spending.

Because the city’s ballpark funding comes from hospitality tax revenues, the investment is not hindering other city priorities such as water and sewer work, Benjamin said.

So many local contractors made up most of the staff on the stadium construction site every day, according to John Katz, president of the Fireflies.

Another benefit to the city’s use of local contractors and staff is pride in the city’s project, Katz said. With a public venue such as the stadium, people who worked on it will be able to bring their families and show off their part of the project. “They’re the ones building this ballpark,” Katz said.

Not counting players and coaches, the team will have about 30 full-time employees going forward, and perhaps a fourth of those either are from Columbia or studied at a local university, Katz said. The team also is hiring from 300 to 500 part-time employees to work at the stadium, Katz said.

As part of the stadium project, a training program in construction was launched with 35 men and one woman, Benjamin said. Those involved came either from Columbia Housing Authority homes or from the Transitions center for helping the homeless learn skills. Many of them worked on the stadium, but some also pursued other opportunities at construction projects around the city, Benjamin said.

Tonight, the stadium welcomes its baseball team, but has it been the catalyst for investment in the Commons at BullStreet project that was hoped for? Absolutely, Benjamin said.

While few businesses have been announced yet, Benjamin remains confident about the plans he hears for the development of the project. He notes that a $25 million office building is nearly ready next to the ballpark, allowing tenants to look down into the stadium. He said he’s eager for more private developments that are in the pipeline for the Bull Street property to be announced.

There also are plans to preserve every historic building that was specified for preservation in the development agreement, including a contract to revitalize the Babcock Center, Benjamin said.

The Bull Street project will build out more quickly than people now believe, Benjamin said, not taking the 20 years to fill that some have predicted. “It’ll happen a lot faster than that,” he said.