Gamecocks football operations building is on time, on budget and off the charts

Home News Gamecocks football operations building is on time, on budget and off the charts
0
By Meghan McPhail February 13, 2018 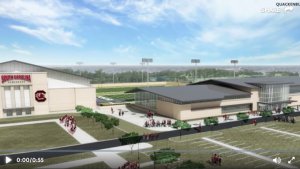 South Carolina’s $50 million football operations building is on schedule to be done by the end of this year.

“The goal is they are going to come back from a big bowl win, hopefully the national championship game, and move into their new digs,” said Greg Hughes, the president of Contract Construction and the man in charge of keeping the project on schedule and on budget (which it also is, he said). “It’s basically a state-of-the-art facility that will exceed anybody’s expectations, including the football recruits.”

Recruiting is never far from Hughes mind while he’s at work, he said. The player’s entrance to the building, which is where recruits will be escorted in, will have displays of the team’s various uniform combinations and a wall of NFL helmets representing former Gamecocks who have played for those teams. The helmets will have touch technology that will play videos showcasing those players, Hughes said.

“We really want to highlight the next level when a recruit comes through the door,” he said. “You know, everything is about recruiting.”

“This building is more about work,” he said. “Besides from those things, it’s going to be about the operations of this football team.”

The two-story weight room will be “one of the largest in the country” and will feature glass doors that roll up to allow direct access to the practice fields, Hughes said.

“It brings the outside in when you’re talking about the weight room,” he said.

Hughes also touted the buildings “finishing touches,” such as the brick pattern from the Horseshoe routed into the buildings doors, light fixtures that mimic the team’s helmet stripes and an elevator with speakers that can play Sandstorm. Every coach’s office will have a balcony and the public lobby will include a “massive” video screen and display of George Rogers’ Heisman Trophy, Hughes said. Contract Construction also built USC’s baseball stadium and Spirit Communications Park, home of the minor league Columbia Fireflies.

“We put a lot of thought into every single detail,” Hughes said.

Hughes and his coworkers have consulted with head football coach Will Muschamp periodically on the project and work regularly with strength and conditioning coach Jeff Dillman.

Muschamp “has assigned Jeff Dillman to be his eyes and ears,” Hughes said. “Jeff is at a lot of our design meetings. He’s a great guy. I’ve enjoyed getting to know him.” 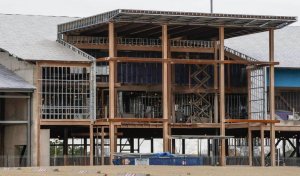